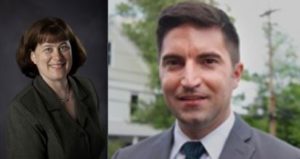 “The strength of the Caucus is not just from the record number of members,” Rep. Farley-
Bouvier noted, “but in the wealth of experience, the expertise and the commitment of the
individuals willing to roll up their sleeves and get to work.  Rep. Lewis and I will provide the
infrastructure to facilitate an inclusive process as the Caucus builds on past successes and
continues with our goals of learning from each other and advocating for shared priorities”

Rep. Lewis says, “I am honored to be entrusted by my colleagues to co-chair the House
Progressive Caucus with Rep. Farley-Bouvier.”   We as a Commonwealth have a lot for which to
be proud, but we should never rest on our laurels. We must continue the hard work of ensuring that our families, schools, and communities have the resources and supports to thrive and that our Commonwealth further leads the fight for our shared values.”

Motivated by the successful passage of several key progressive priorities during the previous
legislative cycle, including criminal justice reform, expanded gun safety laws, and the furthering
of reproductive rights, the House Progressive Caucus is planning another robust cycle.
Framingham Democratic Committee Chair, Beverly Hugo, said, “As those of us who have
worked with Jack know, his outside-the-box thought process will no doubt bring this Caucus to a new level of function, passion and accomplishment. We are all excited for Jack but none of us
are surprised by this show of confidence by his colleagues on Beacon Hill.”

Long standing member of the Progressive Caucus, Rep. David Linsky (D-Natick), notes his
optimism about the year ahead, “I am excited about the direction that our newly elected co-
Chairs – Reps. Farley-Bouvier and Lewis – will take the Caucus, which serves as an important progressive voice in the Legislature. They are both principled and pragmatic, and that is
especially important in these challenging times when that is not always the case in Washington.

Their innovative thinking will ensure that the Caucus advocates for legislation that will continue to move the Commonwealth forward as an accepting and welcoming place for each and every person who lives here. I look forward to working with Reps. Farley-Bouvier and Lewis, and the rest of the Progressive Caucus members, to advocate for progressive legislation this Session. Rep. Farley-Bouvier previously served as co-chair of the Caucus with former-Rep. Byron Rushing and serves as the state representative for the 3rd Berkshire District.  Rep. Lewis serves as state representative for the 7th Middlesex District, which is part of Framingham and all of Ashland.

The Framingham Democratic Committee congratulates and wishes Jack all the best in this
important position!

RT @DrIbram "Limiting Sunday voting would affect Black voters beyond losing the assistance of the church. It would inevitably lead to…

RT @RepKClark Women of color make up 52% of the domestic labor force- caregivers, cleaners, nannies. They're most at risk to #COVID19, paid…

RT @RepKatiePorter When we support women, we support our economy. This #InternationalWomensDay, we must recognize how critical policies…

RT @AyannaPressley To our Women & Girls: You are powerful. You are limitless. Your contributions to this world are brilliant, needed…